Dear club organiser / club centre principle/parent,
The Allen Centre is an Irish Sailing training centre and multi-purpose facility situated on the southern banks of Lough Allen in the town of Drumshanbo. This unique area of Leitrim, close to the rising of the River Shannon, is renowned for its beauty and unspoiled landscapes. As a natural amenity Lough Allen is large enough to cater for day sailing and powerboat trips as well as sheltered and unsheltered training and racing activities. The centre stocks a range of equipment including; a number of powerboats, paddle craft and sailing dinghies including; 8 Picos, 2 Fevas and 1 RS Venture. The centre facilitates access and parking for own-boat usage if the boat owner has personal insurance cover. Inclusive to providing small boat sailing and powerboat training the centre offers indoor and outdoor sleeping and self-catering facilities enabling visiting groups the opportunity to remain self-contained for the duration of their stay. There are a total of 6 rooms situated on the east wing of the building. Each room accommodates 6 people and includes un-suite shower toilet and washing facilities.

Some sample group package options
Below are some sample group packages for sailing clubs with an interest in sail and powerboat training or similar water-based activities such as racing events.
Sample Option 1: Indoor self-catering and centre water facility supervision and training. This includes a senior instructor on the water up to a maximum ratio of 6 sailors to 1 instructor.
Sample Option 2: Indoor self-catering, own club instructor tuition and centre senior instructor supervision. Instructor ratios are as per Irish Sailing guidelines for training and on-the-water activities, in general.
Contact me directly by email or mobile, details below, for tailored package options and prices.

Yours in sailing
Sean Wynne – Centre Principle and facility manager
Some individual Charges
Indoor Accommodation: Rooms including self-catering €70 per room per night. For groups wishing to book all 6 rooms the charge is €60 per room per night.
Use of the centre water facilities: €210 per day
Dinghy sailing boat rental: Pico’s and Fevas €40 each and RS Venture €60 per day.
Power boat rental: €60 per day.
Own-boat usage: No charge. Please Note: Boat-owner insurance is required. 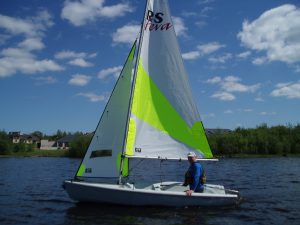 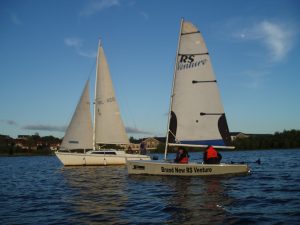 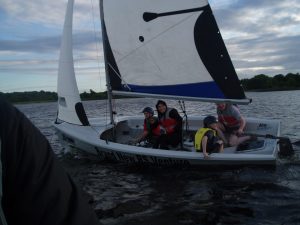 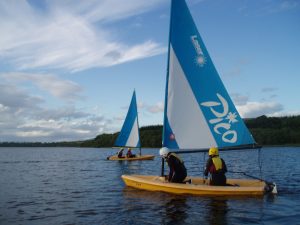 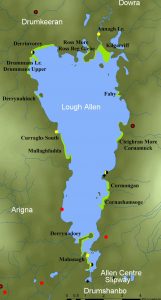 Ever think of sailing on Lough Allen

“Sailing is both a recreational as well as functional activity for millions of people around the world.” Often, when we think of sailing, we think about the massive ships that cruise the oceans, the yachts that race in competitions such as the Green Dragon sailing into Galway, and about the money it takes just to own one, let alone having enough friends or family who might be interested in going out on the water on any given day.

But sailing is so much more than that. It is about connecting with nature and being surrounded, and powered, by the forces that encompass us on a daily basis. It’s often easy to forget that such wonderful things are all around us when we drive to and from work and the stress of everyday living. Everyone should have a go and the club is always looking for new members, they have also open days to promote greater use of the lake.

Sailing doesn’t have to be a process requiring five, six, or even a dozen people to be successful. Small sailboats require only one person to cruise around calm waterways, such as rivers and inland lakes. Of course, whenever you have help, and company, the entire day can open up so many more possibilities. The Lough Allen Education Centre is beside the Lough Allen Hotel. The club is supported by the Leitrim Enterprise Fund and Waterways Ireland and have the facilities to help you make the move.

Malcolm  describes the pleasure of sailing –

“Imagine bobbing gently in the cool water, the air calm, waiting for it to take its next breath. The sail ripples gently but you’re in no hurry and there’s not another boat or person in sight. All you hear are the distant sound of life and nature moving about in its perfect symbiotic way. You don’t concern yourself with gas prices, work problems, or difficulties in a relationship. Out here it’s only about relaxation. Then the wind begins to build. It tugs on the mainsail or the jib and slowly the boat beneath you cuts through the water. The boat leans up gently and your hand is on the rudder, steering straight ahead. Soon the wind is in your face, brushing past you and that’s the only sound you hear aside from the occasional splash of water against the hull.”

You move across the lake, catching every puff of breeze in the sails and you begin to laugh in delight. If you’re alone, you are loving every minute of it. If you’re with someone, you two share a special bond, knowing that this day couldn’t be any better. Sailing helps people to reconnect with not only their inner child and the joys we once embraced on a daily basis, but also with the world around us.

Sure, it takes some skills that can be learned relatively easy before launching for your first voyage, and they can also be discovered through the natural course of trying. Sailing has been a part of human culture for thousands of years and while in its infancy, sailing was more about function than recreation, there’s a reason why millions still enjoy taking to the water to await the next breeze to guide them through the silky glass waterways.

The art of sailing is open to everyone and if you haven’t tried it, you’re missing out.

Our aim is to provide you with a fantastic sailing experience in a professional, friendly, safe and fun environment. We look forward to sailing with you.We also provide camping and caravan facilities for clubs and groups at special rates.

Thb regatta on LoughAllen for the season came ‘off on Tuesday, the 23rd of July 1861. The threatening appearance of the weather, and the rain which had fallen heavily for two or three days previously, had the effect of lessening in some degree the number of yachts in attendance. Although, however, the morning was cloudy, the sun made his appearance some time before the hour of starting, and the day was in every respect favourable both to the sport and to the enjoyment of a considerable party of spectators, assembled as usual at Lough -Allen Island, the beautiful summer residence of M. O’Conor,Esq., which commands an unobstructed view of the excellent sailing course afforded by this noble expanse of water.

The wind during this race was exceedingly high, with occasional squalls, 80 as to test to the utmost the seamanship of the respective crews. Considerable interest was excited by the fact that the Querida was an untried boat, just finished upon the lake for M. 0*Conor, Esq.. by Richard Purdy, of Dublin, foreman to the late well-known builder, Marshall: while the Corsair was a late importation from the Clyde by the crack racing builder of the kingdom. Will Fife, of the Fairlie, and her owner was formerly the proprietor of the third boat, the Avenger, the hero of many triumphs in Shannon sailing matches. The Corsair took a decided lead at starting, butwas closely followed by the Querida. Some accident appeared to have pre “ented the Avenger from getting off as well as the other two boats. After disappearing behind a projecting headland, the boats again became visible in the same order, theQuerida rather best to windward, but Corsair a long distance behind. This order continued to the flagship, which they rounded as follows: ” Corsair, Ih. 5m.; Querida, Ih. 18m. 40s.; Avenger,Ih. 67m* Second race ” LoughAllen Challenge Cup, value 35sovs. ” Corsair, 16 tons, Capt. Holmes; Meta, 8 tons, Hon. R.Ring; Querida, 8 tons, M.O’Conor, Esq.: Shamrock, 2 tons, Mr. J. M’Keon.

The contest for this race was looked to with much anxiety. The success of the Corsair in the previous race induced many to think her the winning boat for this; while the Meta, a beautiful little model clipper by Morisoii, had been just imported by the Hon. Mr. King, and held the highest character as a racer. The cup, too, had been already twice carried off by Mr. King and his success on this occasion would give it to him permanently. The ^veather had moderated a little, though still blowing rather stiffly, and every inch of canvas was set upon the Meta and the Corsair. At 2h. 40m. the gon was fired for starting, and in an instant all four boats slipped their moorings and were off. TheMeta hauled her wind as slowly as possible, the other boats sailing more directly down the lake. The Querida started on the port tack, by which she obtained a decided lead for nearly two miles* The boats rounded the first flag in the following order :”” Corsair, Meta, Querida, and Shamrock, the threefirst^mentioned boats being so close that each could have spoken with those next it, when passing on the opposite tack. The Corsair and Meta from this point forged slowly ahead of the other boats. On rounding the last mark before the flagboat, a very heavy sqaall came on, and some apprehension prevailed as to the result among the spectators on shore, owing to the immense breadth of canvas carried, more especially by theMeta, whose sails would not have disgraced the Flying Dutchman himself. All arrived, however, in safety at the goal, and were timed: ” Corsair, 3h. 56m. SOs.; Meta, 8h. 58m. 50s. ; Querida, 4h. 7m.; Shamrock, 4b. 15m.

Loud cheers greeted the arrival of the Meta, she winning by over 6 minutes beyond the time allowed. The sports concluded by several rowing matches, and at 6 o^clock the company sat down to luncheon in a spacious marquee erected by the stewards, after which they were conveyed on shore by boats provided for that purpose.

In the evening a splendid ball was given at BlackRock, the beautiful residence of A. J. V. Birchall, Esq., which was attended by the elite of the vicinity, and most of the visitors to the regatta. Dancing was kept up until an early hour on Wednesday morning.

“Learn to Sail over a weekend”

Article on Sailing on Lough Allen 1861